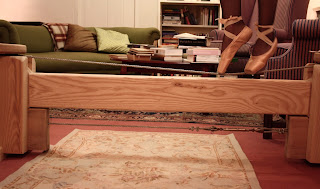 This is one of the photos shown by Katherine at a talk she gave to some Year 7 pupils at Oxford High School on Friday - her study at All Soul's, with a tightrope in the foreground. Inspired by Philippe Petit's high wire walk between the twin towers in 1974, she tried to teach herself to walk the tightrope as a child and broke so many bones her parents finally sent her to tightrope classes. She gets up very early to write, and starts the day by walking the tightrope because it wakes you up: 'It makes your blood tingle,' she says...Which makes my going for a walk with the dog every morning seem very tame! 'I've always wanted to be up high,' she said.

She started writing her first book, Girl Savage, the day after her 21st birthday - 'What could be easier than writing about your pet monkey?' Also at 21, she won a fellowship at All Soul's in Oxford - 'Everyone there is about 70; their moustaches trail in the wine.' One of the fellows told her that there is a secret way up on to the roof, and so at night she escaped up there - 'At 2am you are the only person awake. It's the closest you feel to being magic.' Her second book, Rooftoppers, is partly inspired by those night-time outings and is about a child who sets out to find her mother: 'Mothers are maybe the best thing in the world.'

Katherine told the girls her rules for being a writer:


1. Read!
Books that she loved when she was younger are
Charmed Life, Diana Wynne Jones
Ballet Shoes, Noel Streatfeild
What Katy Did, Susan Coolidge
Journey to the River Sea, Eva Ibbotson
Hamlet
2. If you're good at something, acknowledge it and celebrate it. Don't underplay what you can do. She saw that as a particularly female thing - apologising in advance for everything.
3. Write about what you know.
4. Be firm with yourself. It's always going to be hard to be a writer - but you have to remember that this is what you want to do, you are doing what you most want to do. 'When you try to avoid writing remind yourself you are doing what you wanted since you were four. It keeps you going...To keep going you need stamina and grit.' She described tying herself to the chair, to make sure she stayed there and didn't get up..
A story, she said, is like a dream - you have to think - what if? She took a page and divided it into four sections - Character, Place, First Sentence and What if? 'Ideas are quick to come if you kick them around a bit,' she said. And 'never give up on being curious - it's where the exciting things are.'

Comments from the girls:

‘I thought she was very funny and you could definitely tell she was very passionate about what she did and enjoyed writing.  I really liked it when she said that she tied herself to her chair with her boot laces to remind herself why she was there,  when it got tough.’

‘One of my favourite stories that she told was of her climbing up the walls and towers of All Souls College in Oxford.  It seemed so exciting to be up that high in the depth of the night, all alone with the world at your fingertips.’

‘It was really funny - when she shared her wish to go to the South Pole and someone asked her ‘Why?’ she replied ‘Who doesn’t?’ in a shocked but casual voice.’

‘I felt very inspired to never give up.’

‘She is SO COOL!  I wish I had lived in Zimbabwe…I really want to be like her.  No, hang on, I want to BE her!  She is so random and awesome that she is like a character in a book.’

Rooftoppers has been shortlisted for the Guardian Children's Fiction Prize!