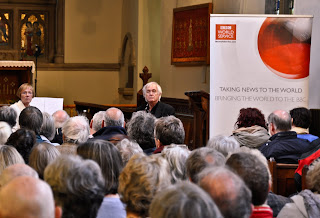 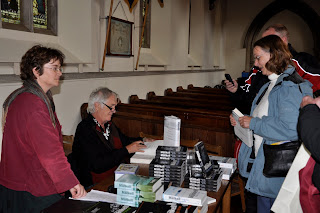 We had a fabulous afternoon on saturday - the church in Woodstock was packed with around 300 people and the BBC did a superbly professional job on the sound system so everyone heard perfectly. It was fascinating being part of a broadcast - Karen, the producer of the BBC World Book Club, told us what to expect and not to worry about fluffing our questions as the recording wasn't going out live, and Harriet Gilbertt, the interviewer, also put people at ease. And then we were off - Harriet's voice changed immediately into a BBC announcer's voice, and Henning Mankell began unexpectedly with a short speech about voice amplification, questioning the need for microphones in a church where people have spoken and been heard for hundreds of years unaided. The amplification was, in this instance, necessary as there was a soundman, Tim, in the vestry, recording everything for a broadcast on the BBC World Service on July 2nd at 11 am. So if you were not able to be there on saturday or would like to hear it all again and find out the differences between a live and an edited discussion, you can listen to the radio on July 2nd.
The top picture shows Harriet Gilbertt introducing Henning Mankell; the one below shows the aftermath of the talk, me on the left and Henning Mankell in the middle, signing books.
Posted by Rachel at 11:44