The next Woodstock Bookshop talk is by Harry Bingham. Harry lives locally and is a hugely prolific novelist, author of - among other books - The Lieutenant's Lover and Glory Boys. He also runs the Writers' Workshop, an editorial consultancy for writers.

His three latest detective novels are BRILLIANT! They feature DC Fiona Griffiths, living and working in Cardiff. She is entirely her own character, but has aspects of the wonderful Sara Lund from The Killing, and of Lisbeth Salander, the heroine of the Stieg Larsson (Girl with the Dragon Tattoo) trilogy. Fiona is unconventional, partly because she was very ill as a teenager with Cotard's syndrome - 'It took quite a long time to develop Fiona, but the thing that locked everything in place was her Cotard’s Syndrome, an illness where sufferers believe themselves to be dead. It seemed to me that the condition was perfect for a crime story. It’s a mystery in itself. It walks a dark edge between life and dark. And it places the detective herself as the ultimate outsider.'

There are three Fiona Griffiths novels so far - Talking to the Dead, Love Story, With Murders and, just about to appear, The Strange Death of Fiona Griffiths. I have found each more compulsive than the last.

We are very glad to see that novelist Jane Gardam has been shortlisted for the first Folio Prize, a prize open to English language writers from around the world. If you haven't yet read Jane Gardam this is as good a time as any to start: Last Friends, the final novel in her Old Filth trilogy, has just been published in paperback. This trilogy is excellent - each book is based round one of three main characters and tells their story, which intersects with and overlaps the stories of the other characters in fascinating ways. Start with Old Filth (not about some pervert, but an international lawyer - the initials stand for Failed In London Try Hong Kong) and you will become addicted. 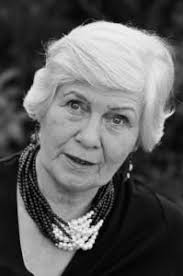 Newer Posts Older Posts Home
Subscribe to: Posts (Atom)
If you would like to receive information about talks at The Woodstock Bookshop please send us your email address and we will add you to the mailing list. All talks must be booked in advance by ringing, emailing or calling in at the bookshop.
Bookshop Talks
Thursday 5 March, 7pm
Anne Stevenson reads from her 16th collection, Completing the Circle (Bloodaxe Books), Woodstock Town Hall. £8; advance booking essential.