I went yesterday evening to hear Seamus Heaney talking to Kevin Crossley-Holland about his life and work. It is a measure of how very highly SH is regarded that the uncomfortable upper levels of the Sheldonian were packed.
I took a few notes during the evening -
He talked about his early writing:
'The first thing I made up was pastiche Milton' (at school)
'At university I wrote poems, I thought, but I wasn't sure.' He mentioned form, the craft of poetry - 'Making the cage is important and sooner or later you can get the bird to sing by itself.'
He read to us, 'Personal Helicon' amongst others and, at the end, 'Postscript'.
'I was lucky enough to write some poems that I believed in...Some poems come quickly - in my experience they're the ones that you love and trust the most. They come like a gift.'
He talked about the poets he loved, poetry that he returns to again and again - Dante, Homer, Yeats, Ovid, Virgil - and about encountering Ted Hughes for the first time when he read Lupercal: 'I thought, my God! How does he know about all that? I thought I was the only one who knew about it.'
Gerard Manley Hopkins is a huge influence, too - 'I got gooseflesh when I read him first, which was at school...in the full sense of the term, he brought me to my senses.'
He said that at first, he didn't think of himself as a poet. He wrote poems, and had a teaching job. He had some poems published, but carried on teaching. Then, after his third collection, he and his wife moved out to the country with their boys and he went to the local school to register his children there. The teaching was all in Irish. The headmaster asked his profession and, before SH could answer, he saw the man was writing 'file' - Irish for poet...He worked on his translation of Beowulf because he was used to going to work every day and thought he should keep it up...
He was asked about what he thought the effects of poetry were, how you recognised poetry, and described a poem such as Elizabeth Bishop's 'Fish' as 'moving towards some sense of satisfaction...It helps inwardness...it establishes a useful solitude in you...you feel verified...Poets you know and love, they more than satisfy you, they settle you.' Poetry, he said, 'has staying power - it stays the moment.'
'I was stretched between the contemplation of a motionless point and the urge to participate'
He greatly admires Robert Henryson, the Scottish poet.
He also strongly recommended learning poetry by heart: 'It's a support system, having a head full of quotations.'
Someone asked how he knew when a poem was finished - an excellent question, he said. Someone he knew had tried to write a PhD on the subject but had to give up for lack of evidence.

We had a lovely evening in the bookshop with Fiona Sampson - she read from Coleshill and spoke about Poem, the new quarterly she is editing. It was, she said, the first time she had read from Coleshill, which was published on 7th March. How lucky, to launch the book!

It's been a long time since we had a reading in the shop and when we were carrying chairs along the road and moving books around the shop I began to wonder if it was worth the effort. But a smaller reading has a very special atmosphere, particularly with such a good reader, and now that everything is resettled the shop looks a lot more inviting too.

There were some interesting questions following the reading - someone asked who Fiona reads for pleasure, which poetry she returns to again and again - and she particularly mentioned TS Eliot and his Four Quartets; Geoffrey Hill, especially Tenebrae; Czeslaw Milosz and French poet Yves Bonnefoy.

You have to read this book - it's the best children's book I've read for a long time, the second book by the hugely gifted Katherine Rundell. Sophie, 'found floating in a cello case in the middle of the English Channel' is rescued and taken home by Charles Maxim, a fellow survivor. He cares for her, loves her, and together they evade the authorities and go to Paris to search for Sophie's mother - because, as Charles has taught, one should 'never ignore a possible'...It is a story about bravery and belief, beautifully written and anyone aged eight or nine and over should read it...

Yet again the smaller, independent publishing presses are triumphant in this longlist for the Independent Foreign Fiction prize which just goes to emphasise what a brilliant job they do publishing translated fiction:

The prize shortlist will be announced on 11th April, with the winner revealed in May. Turkish novelist Elif Shafak is among this year's judges,as is Independent literary editor Boyd Tonkin.
Posted by Rachel at 11:42 No comments:

Storytelling at The Woodstock Arms 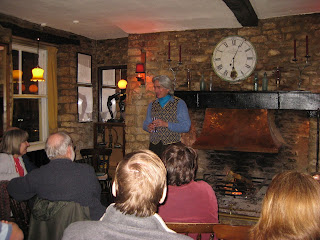 The Woodstock Arms provided a very cosy and hospitable venue for storyteller Kevan Manwaring when we met there last Sunday, with a crackling fire - just the right setting for Oxfordshire folktales...Kevan told several tales, among them the story of Frideswide and the Treacle Well and, even more local to Woodstock, Fair Rosamund's Bower - all to be found in his collection published by The History Press.

Shortlisted for Independent Bookshop of the Year

We have just learnt that the shop is on the regional shortlist for Independent Bookshop of the Year - very good news as we approach our fifth birthday, which is in itself something of a triumph in this financial climate and with so much competition.
A huge thank you to everyone who buys books from us and to the authors who have given their time to talk here and contributed to our success.
Posted by Rachel at 15:18 No comments: