We had a great launch for Washing Lines last Saturday. Janie and Barbara had decked the Methodist Church with washing lines and poetry and the church was full. The photos show Gillian signing books after the reading, and chatting to Janie and her husband Nicholas just before the reading began. Barbara can just be seen on the far left. 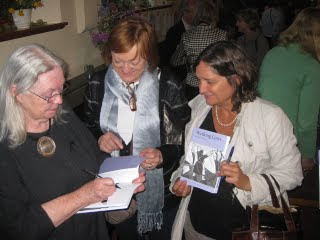 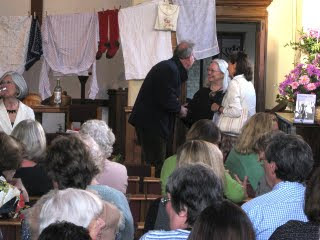 Gillian Clarke's reading was wonderful - we have some CDs of her reading her work in case anyone would like a permanent reminder of how well she reads (the recording was not made at our talk so is not exclusively about washing). She began with tribute to the four miners who had just been found, reading an earlier poem in memory of another accident -

Six Bells - 28th June 1960
Perhaps a woman hanging out the wash
paused, hearing something, a sudden hush,
a pulse inside the earth like a blow to the heart,
holding in her arms the wet weight
of her wedding sheets, his shirts. Perhaps
heads lifted from the work of scrubbing steps,
hands stilled from wringing rainbows onto slate,
while below the town, deep in the pit
a rock-fall struck a spark from steel, and fired
the void, punched through the mine a fist
of blazing firedamp. As they died,
perhaps a silence, before sirens cried,
before the people gathered in the street,
before she'd finished hanging out her sheets.

She read a lot from Washing Lines, and from her own work. A treat was to hear unpublished, recent poems, including one just completed that day. She also read Shirt of a Lad, an anonymous poem translated by Tony Conran, which will surely be in a future edition of Washing Lines. 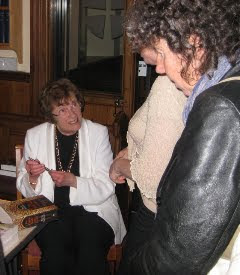 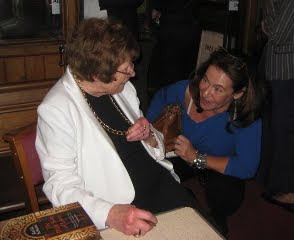 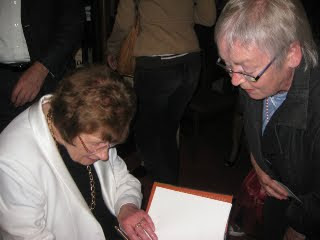 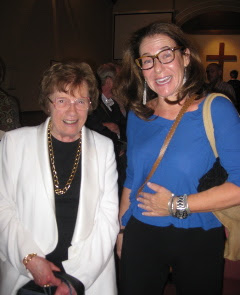 The photos show, from top to bottom, Anthea Bell signing books after her discussion with Boyd Tonkin; with Melissa from Pushkin Press; signing again and with Melissa. The Methodist Church was full (you can see the cross just over Melissa's shoulder). Pushkin Press produce the most beautiful paperback editions of literature in translation and have published many of Stefan Zweig's books, translated by Anthea Bell - for a look at their superb catalgue see here.
The other small publisher whose books we stocked for the evening is Arabia and Haus
publishing, who publish Rafik Schami. Schami was born in Syria but has lived in political exile in Germany since 1970. He is the winner of numerous international prizes and is among Germany's bestselling novelists - Anthea Bell has translated two of his books, The Dark Side of Love and The Calligrapher's Secret, and she picked out the former as one of her favourite translations. Her most recent translation for Haus is The Indies Enterprise by Erik Orsenna which is coming out very soon (we have early copies here - it is a fantastic story of the effects of discovery.
Boyd Tonkin asked excellent questions and, while Anthea was modestly describing her work as craftsmanship, he declared she was like Yehudi Menuhin, a virtuoso able to bring writers to life in another language. We were lucky to hear her.
On 9 October 2011 at the French Institute Anthea Bell will be sharing her passion for translation, and her experience of taking on upfront the most challenging of them all, the very Gallic Asterix!
Book online on http://www.institut-francais.org.uk/bdandcomicspassion/
Posted by Rachel at 11:15 No comments:

Oxford was recently saddened to hear of the loss of author Christine Holmes. Holmes is probably better known as an historian of Captain Cook and Anglo-Saxon Benson, but she was also a novelist. The Lily & The Crocodile (published in Germany as The Queen’s Physician) is an exuberant read set inside Cleopatra’s royal quarters and beyond. The Song of Deborah, set a thousand years earlier in Palestine, is an intimate tale of two heroic women in the Biblical time before Kings….. Roke Elm is a gem of a modern story set in southern Oxfordshire. This is a truly magical tale of gentle love, and loss, rooted in the very fabric around Benson and the Chilterns. All three novels (in special paperback editions printed for Holmes’s memorial in Oxford) are available from The Woodstock Bookshop at £10 each.

Labels: The Lily and the Crocodile; The Song of Deborah; Roke Elm

Professor Basil Mitchell, a Woodstock resident for many years, died in June 2011. He had a long and distinguished career as an academic, mainly in Oxford, where he was Fellow and Tutor in Philosophy, Keble College, Oxford, 1947-67, Emeritus Fellow of Keble, 1981, Nolloth Professor of the Philosophy of the Christian Religion, Oxford University, Fellow of Oriel College, 1968-84, and Emeritus Fellow of Oriel, 1984. Before his death he published Looking Back: on faith, philosophy and friends in Oxford (£19.95). It is a fascinating account of his life and philosophy and very well written. If anyone has difficulty getting hold of a copy we are happy to send it out.

Labels: Basil Mitchell Looking Back
Newer Posts Older Posts Home
Subscribe to: Posts (Atom)
If you would like to receive information about talks at The Woodstock Bookshop please send us your email address and we will add you to the mailing list. All talks must be booked in advance by ringing, emailing or calling in at the bookshop.