The Woodstock Bookshop Bookgroup meets on the second wednesday evening of the month at the shop at 7pm. So far we have discussed:
Lorrie Moore's Birds of America; The Razor's Edge; Absurdistan; Balzac and the Little Chinese Seamstress; To Kill a Mockingbird; the 2010 Orange Prize shortlist; Midnight in the Garden of Good and Evil; Ragtime; Little Brother; A Scattering; A Far Cry from Kensington; The Glass Menagerie; The Photograph and Room.
On March 9 we will be discussing Greg Mortenson's Three Cups of Tea.
If you like the idea of joining please contact us as we hold a waiting list for new readers. We take it in turns to choose what to read and meetings last around an hour.
Posted by Rachel at 13:55 No comments: 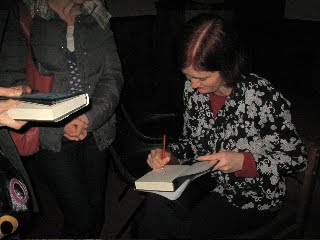 We had a full house at The Methodist Church last night for Frances Wilson and Emma Donoghue.
Emma began by reading from Room and now when I read it her voice is in my head. If you do get the chance to hear her, go along - or listen to her on the radio. She reads superbly. She and Frances then discussed the book which was fascinating. I should have taped it or at the very least scribbled notes. Above is a picture of Emma signing books at the end, when a long line of people filed up the aisle to meet her.
Frances's questions were enthusiastic and very acute and provoked answers that made me want to read the book yet again. I particularly loved what she said about Jack feeling safe in Room, surrounded as he was by all his transitional objects. Emma said she was pleased with how she managed to depict Ma through Jack - it's not an easy thing to do, and the adult reader has to be able to see beyond Jack's descriptions and interpret what is said or what happens. We gradually realise Ma's vulnerability and weakness but also her strength. She wanted to show Ma could be strong when it came to dealing with Old Nick over Jack, that Ma had managed to protect Jack and also to prevent Old Nick from forming any relationship with him. She wanted Ma to make Jack strong, like the hero of his story rather than a victim. It was important that Ma and Jack stage their own release and also that Old Nick should be polite and inoffensive - evil, she said, is so often banal.
It was interesting, too, to hear Emma describe how she writes. She said she spends a long time planning, going over and over things in her head, writing what should happen when. The book is as tightly organised as any detective story, and she gave a hilarious account of wrapping her (willing) son up in a rug to check what it would feel like and how long it would take to escape. She made the language as clear and simple as she could and didn't put in any swear words or descriptions of sex because Jack is protected by Ma and in spite of everything has no knowledge of sex. It is beautifully written.
Posted by Rachel at 12:30 No comments:

Labels: Frances Wilson
Newer Posts Older Posts Home
Subscribe to: Posts (Atom)
If you would like to receive information about talks at The Woodstock Bookshop please send us your email address and we will add you to the mailing list. All talks must be booked in advance by ringing, emailing or calling in at the bookshop.