On a more positive note, I have just seen the shortlists for the Carnegie and Greenaway prizes - Neil Gaiman appears in both lists - and Julie Hearn's excellent book Rowan the Strange is on the shortlist.

The Graveyard Book by Neil Gaiman

The Vanishing of Katerina Linden by Helen Grant

Rowan the Strange by Julie Hearn

The Ask and the Answer by Patrick Ness

Leon and the Place Between by Grahame Baker-Smith

The Graveyard Book by Chris Riddell (text by Neil Gaiman)

The Dunderheads by David Roberts (text by Paul Fleischman)

There are Cats in this Book by Viviane Schwarz
Posted by Rachel at 11:25 No comments: 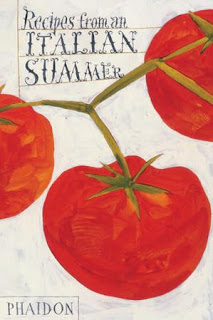 This is a beautiful book and it is currently in my window. It costs £24.95. A man came in to the shop yesterday and asked to look at the book, so I took it out of the window and gave it to him. He spent a long time looking at it and then said, 'What are you asking for it?' I said that I couldn't sell for below the retail price as I am an independent bookshop and don't have the margins to cut prices. When he heard what it cost he gave it back to me, saying, 'I don't want to pay that much for it,' and walked out. The point is, he has a choice and he can buy it for less.
I have checked on Amazon - the book is on sale for £14.64 and it even has super saver delivery. It costs me slightly more than that to buy the book from my wholesalers. I doubt the man would have come across the book unless he'd seen it in my window but he undoubtedly went home to buy it online, congratulating himself on having saved so much money. Not surprising, then, that I read this morning, 'Online retailer Amazon reported a 68% rise in net profits for the first quarter of the year to $299m (GBP194.5m).'
It doesn't make sense. I am proud of my stock and the advice we can offer customers. We have to pay for the premises and all the costs associated with trading, such as electricity, Nielsons book data and so on. We are not overcharging, and give discounts to schools and book groups. But if most customers behave like that there soon won't be any independent high street booksellers: we can't depend on the enthusiasm of a bookish minority who buy from us in spite of the ruthless undercutting because they value our services.
Still, it's a glorious morning and I'd rather be here in the shop than most other places, so I'll enjoy it while I can.

Please book in advance for these talks - otherwise I end up torn between having to turn people away or squeeze too many people into the shop. If I know the talk is going to be very popular I can always book the Methodist church at short notice but I do need to know at least a day in advance! The church has very comfortable chairs and is a nice venue if not quite so cosy as the shop.
We had a crowd here last night to hear Jane Robinson talk about Bluestockings, her book on the history of women's university education in England. Jane said she was inspired to write the book when she realised that while Cambridge university recently celebrated its 900th anniversary, two of the Oxford women's colleges were celebrating 60 years of being fully part of the university - it was the gap between these that interested her. After a clear and compressed account of how women managed to achieve degrees (they were very charming and determined not to be confused with the suffragettes - 'it's called being subversive,' suggested one member of the audience), quoting from several diaries and letters, Jane finished with the story of Trixie Pearson and her mother Ruth which left me almost in tears (see Bluestockings, pp 1-4). We had questions and some fascinating contributions from the audience that made us all realise this wasn't some remote account of wrongs long rectified but something that still affects us daily. There was the story of a professor who went to a doctor recently and when her details were being checked she pointed out that she was 'Professor', not 'Mrs': the computer came up with 'status incompatible with gender'...
Posted by Rachel at 09:00 No comments: 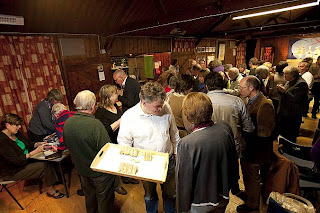 Another hugely enjoyable evening at Wootton Village Hall on Friday night when Prue Leith came to talk about life beginning at 70. She was charming and funny and made starting several businesses sound as easy as making a cake. This picture shows the aftermath, with Andy in front offering very delicious sandwiches and everyone chatting (the talks are very convivial). Prue is signing books far left.

Labels: A Serving of Scandal
Newer Posts Older Posts Home
Subscribe to: Posts (Atom)
If you would like to receive information about talks at The Woodstock Bookshop please send us your email address and we will add you to the mailing list. All talks must be booked in advance by ringing, emailing or calling in at the bookshop.