Letters from the Front 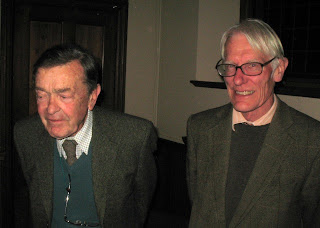 Pictured are John Ledingham, left, and Arthur Stockwin, following last night's talk at the Methodist Church.
Arthur brought along the letters he found after his mother's death, still in the Fuller's box where she kept them. He also brought family photographs and a long photograph of part of the Front. Hearing some of the letters it was hard to believe they were written almost a hundred years ago - they are so fresh and the relationship that develops between the young couple is so vivid.
John somehow managed to reduce over 250 pages of letters to a twenty-minute summary, quoting brief extracts as illustration. The book itself represents only about a quarter of the letters between Gerard Garvin and his parents. I can't think when I have read a more moving collection of letters. They give a fascinating picture of life in England during the war: Gerard's mother kept him supplied with food and clothes - he sent his washing home weekly and in one of his final letters he says, '...can you send me some Tiptree, or some of Beach's Farm, which I'm told is as good, and a folding knife, fork and spoon. Please don't send many sweets because I don't eat them much now.' The letters from his parents survive because Gerard packed them up and sent them all home just before he died. He also wrote a final letter of farewell shortly before the final battle. His reading list while at the front is extraordinary - Moliere, Shakespeare, Wordsworth, Thucydides - a full list is at the end of the book. He was clearly a very clever and very well educated boy. A year after his son's death, J L Garvin visited the Somme and saw where Gerard had been killed. Afterwards he wrote about the battlefield in the Observer (he was the editor): 'Here are poppies, deep cornflower, wild mustard, thyme and the rest...The spirit of earth is weaving patterns of bright wonders and robing our dead as kings.'
I am so glad we were able to rearrange this talk and very grateful to John and Arthur.
Posted by Rachel at 10:57