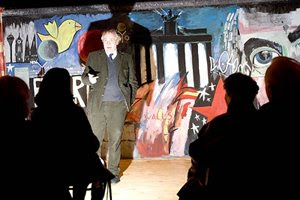 Talks are very popular in and around Woodstock. I went to the inaugural talk of the Woodstock & Area Literature Society last week - Dr David Grylls on 'Sex in Victorian Fiction', which was every bit as fascinating as it sounds. And I thought what a great way to spend an evening - sitting with other people, all listening together to someone who speaks with great enthusiasm and energy. It feels very retro and I suspect it's the way forward.
Posted by Rachel at 14:22